Few things are as irritating as loud and unexpected noises. Exposure to noise activates the brain’s stress pathways and triggers the release of related hormones such as cortisol. But if certain sounds have the ability to unsettle us, would it be that other sounds would have the power to heal us?

In cultures all over the world sound healing has been a tool for promoting the physical and emotional health of the body for as long as history can account for. From Australian aboriginal tribes using the didgeridoo as a healing instrument for over 40,000 years to Egyptians using vowel sound chants in healing because they believed vowels to be sacred. These practices highlight how sound manifests through physical vibrations and frequencies and though science is still catching up to understand how sound heals, the current research is very promising. There is strong evidence that music has mental and physical health benefits in improving mood and reducing stress. In fact, rhythm, in particular can provide physical pain relief and has shown to help people with pain from arthritis, menstrual pain, or knee replacement pain.

There are many different theories that attempt to explain why sound experiences can be linked with deep relaxation and physical pain relief from the placebo effect to sound stimulation that touch fibers in the body that affect pain perception. But what we do know is that in your ear is the vestibulocochlear nerve which connects to the vagus nerve, the major parasympathetic nerve in the body. The parasympathetic nervous system is responsible for reducing stress, lowering blood pressure, and relaxing muscles.

Another theory on the benefits of sound rest on the concept of binaural beats which states that “listening to certain frequencies can change one’s brain waves”. What are brain waves? They are electrical activity in the brain as displayed in the form of brain waves or rhythmic repetitive frequencies. These rhythms can be measured using a device called EEG. There are five categories of brain waves and different states of alertness and consciousness in different parts of the brain generates varying frequencies of brain waves.  Gamma waves are involved in tasks that take higher processing. Beta waves occur when the brain is active, alert, and engaged consciously. Alpha waves occur when the brain is resting after finishing a task or when one meditates. Theta waves are associated with daydreaming and REM dreaming phase of sleep. This kind of state is associated with times when ideas and creativity flow. Delta brain waves are the slowest and associated with deep, dreamless sleep. The importance of these waves can be imagined by knowing the reactions that they produce. For example, too much gamma waves result in anxiety or stress. Too little gamma waves result in depression. 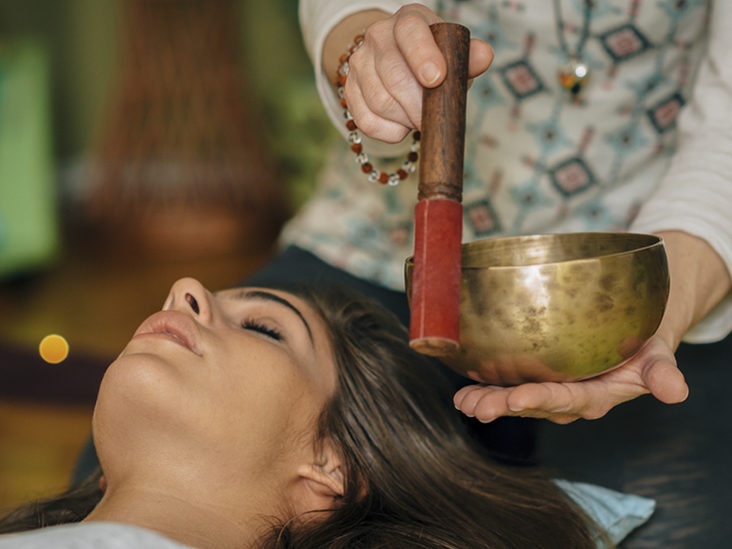 Now the question arises, can someone manipulate our brain waves? If you have two identical tuning folks tuned to the same note and tap one of them, the second fork also starts vibrating in sympathy. Research in binaural beats show that different frequencies presented to each ear through stereo headphones create a different tone as the brain puts together the two tones it’s hearing. For example, frequencies of 200 Hertz and 210 Hertz produced a binaural beat frequency of 10 Hertz. Now as we know each center in the brain generates a specific frequency based on the predominant chemical it’s secretes. So, when we send in waves of electrical energy at 10 Hertz, certain areas in the lower brain stem will respond because they normally fire within that frequency range. It has been shown that stimulation of gamma brain waves reduces Alzheimer’s. Sound can even heal cancer cells.

If you’ve seen opera singers shattering glass from their voice you must have noticed that the first thing they do is tap the glass and listen to its resonance pitch so that they can vocalize the same frequency. The glass will not shatter if the resonant frequency is not matched. So, researchers thought maybe we could also shatter something microscopic if we find the right frequency. Doctors have used focused ultrasound to destroy tumors in the body for quite some time now, but the method used damaged both cancer and healthy cells alike as it focuses on heating the blood around the cells through sound. So, they started searching for the magic frequency. They started with 100 Hertz and looked through the microscope to see if anything was happening. They tried hundreds and thousands of frequencies to find the magic combination. We know now that cancer is vulnerable between the frequencies of 100,000 to 300,000 Hertz.  This has helped in developing a low intensity ultrasound approach that exploits the unique physical properties of tumor cells to specifically target only them and provide the most selective, safer option.

There are many questions left to investigate about the precise mechanism, but the findings are very encouraging. Nikola Tesla said” if you want to know the secrets of the universe think in terms of energy, frequency, and vibration”.  Albert Einstein said, “everything in life is a vibration”.  Clearly there is and enormous amount of work left to be done but with new advances in technology we can imagine the future of healing around what’s being called medicine’s best kept secret.