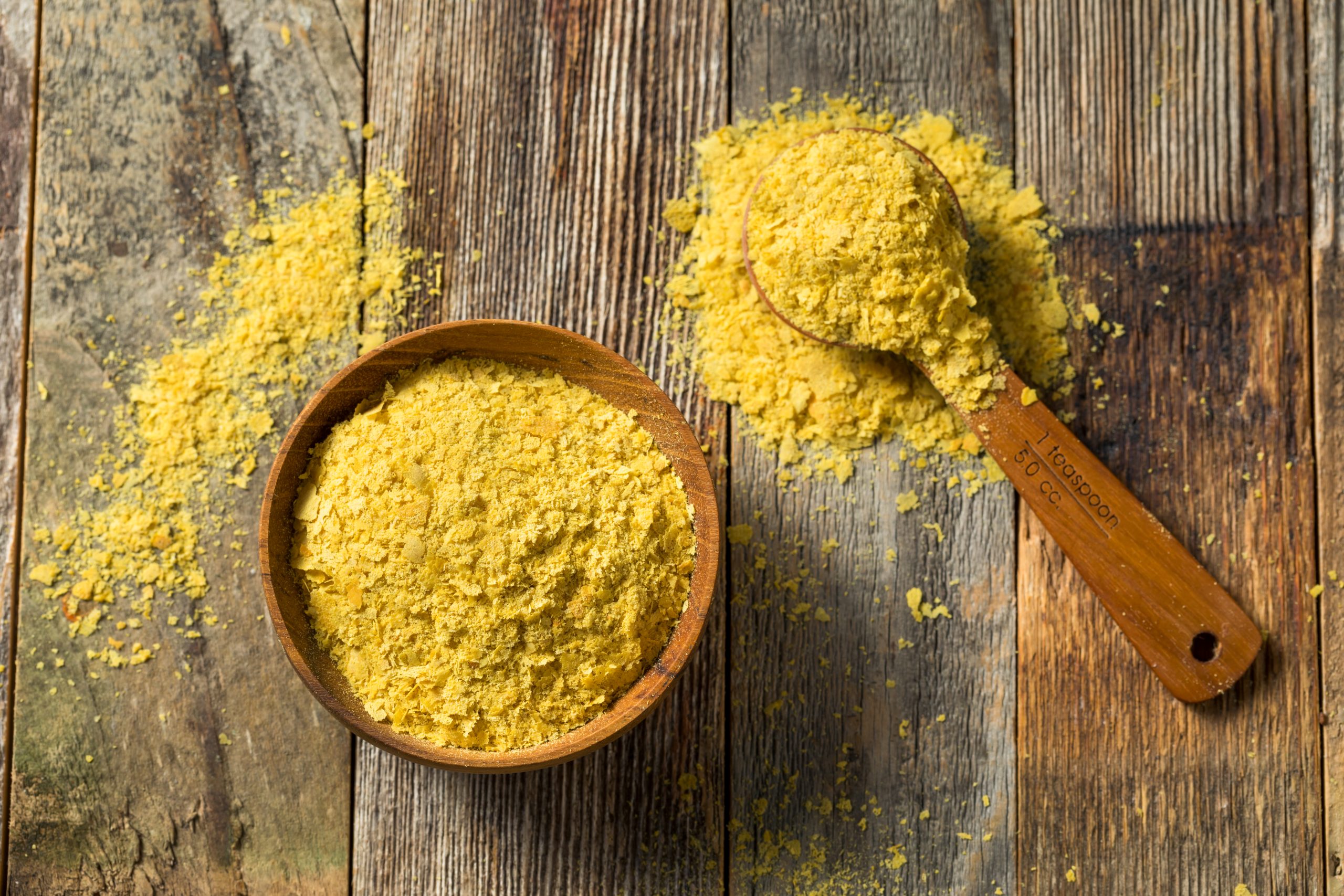 Nutritional yeast is a natural source of vitamin B1.  But be aware that when you buy nutritional yeast they will usually fortify it with synthetic vitamins which are sourced from things like coal tar acetate, ammonia, and hydrochloric acid.  But synthetic B1 is not the same as a natural B1. Synthetics are a lot cheaper and natural B1 is a lot more expensive because you have to use more raw material from some natural sources to get a very tiny amount of the vitamin. But it’s totally worth it because the effects that the B vitamins, specifically B1, has on the body are important and widespread especially nowadays as  it relates to stress.

Yeast are vitamin producing machines, they make B vitamins and amino acids. In fact, nutritional yeast is a complete protein. It has all of the essential amino acids and has quite a few trace minerals too like selenium for the conversion from T4 to T3. It also has zinc and copper which is very important in your immune system and in building testosterone. It has chromium which is really good for blood sugars. It is loaded with phosphorus which makes up something called ATP – adenosine triphosphate which is the energy currency of your body. It will give you more energy. It also has beta glucan; you may have heard that when people are talking about oatmeal or consuming Cheerios because these grains are so-called heart healthy. Beta glucan is a type of fiber that can help lower your cholesterol. But what about all the carbohydrates in cereals that’s going to raise insulin and create other issues. Beta glucan can also help with the immune system.

B1 is the most important water-soluble vitamin, vitamin D is the most important fat-soluble vitamin. B1 is needed in all of your cells in the energy factory of your cells called the mitochondria. When you take oxygen, fuel, and a spark plug you get energy. The spark plug in our body is thiamine (B1), without the spark plug (B1) you cannot generate energy. If you give the body too much fuel, as in a high carb diet, you’re going to flood the “engine”.  So in our bodies if we have too much glucose, as in too many carbohydrates, the requirement for B1 rises dramatically higher and if you’re not consuming B1 you’re going feel tired all the time and that’s called chronic fatigue syndrome. So, one of the big benefits of nutritional yeast is it gives you energy. It’s great for athletes to maintain endurance.

There are other benefits of nutritional yeast but first we need to explain part of the brain called the limbic system. It has different structures in it that do different things related to homeostasis which is the body’s ability to adapt to the environment to maintain a constant state of function internally.  And also, you have the autonomic nervous system that’s working with this system. So, we have both the flight or fight mechanism (sympathetic nervous system), and we have the rest and digest (parasympathetic nervous system).  Sympathetic and parasympathetic – one system is trying to speed everything up and adapt to stress the other system is trying to calm things down to help you digest and help you sleep at night.  Of all the structures in the brain, the limbic system, is the part that needs a tremendous amount of oxygen because there’s a lot of oxidation going on. So, the need for B1 is really high and so that part of the brain is very susceptible to a vitamin B1 deficiency. In one part of that system called the amygdala gives you the emotion of fear. It’s a survival mechanism and so if you are deficient in B1 you’re going to find that you have different states of fear like anxiety, nervousness, and panic.   If you’re sleeping at night and you have nightmares it could mean you’re deficient in Vitamin B1.  Panic attacks could be caused by a severe B1 deficiency.  So taking nutritional yeast can greatly help anxiety and stress and make you feel very calm. It helps to decrease irritability and the sensation of feeling aggravated. If you have a low tolerance to stress, then you may benefit from nutritional yeast. Another symptom of a B1 deficiency that can be improved with nutritional yeast is just general confusion, lack of clarity, or lack of focus.

If you go to bed at night and you start thinking excessively, the thoughts just keep going and you can’t turn them off, taking nutritional yeast before bed even though it increases energy, won’t keep you up at night. In fact, it will calm down things so you can drift off into a night sleep.

Nutritional yeast also can help a condition called POTS.  This is the condition where you stand up and you feel dizzy, and you might feel like you want to faint or pass out.  That is part of the autonomic nervous system’s inability to adapt to stress.  Nutritional yeast will support the autonomic nervous system’s ability to cope with physical stress.